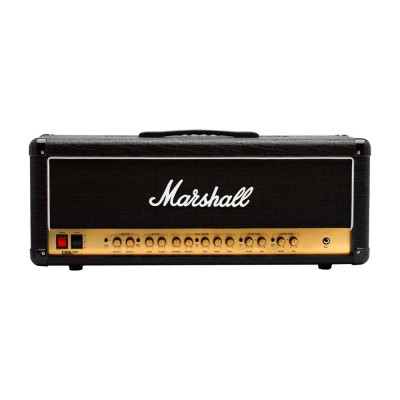 From rehearsal room to live performance, the DSL100H all-valve head is truly versatile. With its Classic and Ultra Gain channels, it can take you from brilliant cleans to high-gain shred, and all places in-between. It’s based on the massively popular JCM2000 DSL100H, and has the same valve complement four ECC83 in the preamp and four EL34 in the power stage and the same feature set.

There are however some significant upgrades: Resonance control replaces the Deep switch, allowing you more control of the lower-end chunk; studio quality digital Reverb instead of spring Reverb; there’s a rear panel Pentode/Triode switch which drops power output from 100 Watt to 50 Watt which changes the amp's sonic character and playing feel, and a rear panel series FX Loop.

The flexibility of the shared five-way EQ section is increased further by a Tone Shift button which scoops the mid frequencies, making it ideal for modern metal styles.

The DSL100H, with awesome tone and real flexibility, is incredible value for money.